This year’s Super Bowl was a bit weird since I’m so used to attending a BBQ or something in the afternoon, but here in New York, Super Bowl didn’t start until 6pm. Still, many fun times were had at the potluck at my cousins’ place in Brooklyn.

I made lumpia and walnut brownies with vanilla frosting though it seems there was no need since there was SO much food at the party—pizza, dip, ice cream cake, tiramisu, mac&cheese, BBQ wings and lots of beer and wine… but the most intense amount of food was the 81 McDonald’s cheeseburgers brought by a few of Kuya Jay’s and Kuya Jeff’s friends. Yes. Eighty-freaking-one. 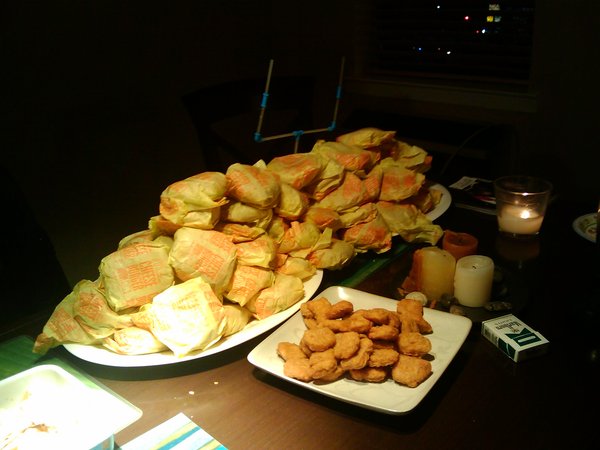 It was insane. It got to the point that people were so incredibly full and there was still so much food left that Ryan started putting the burgers in people’s coat pockets (most of our coats were in Kuya Jeff’s room) in hopes of getting rid of some of them.

Still by the end of the party there were at least 40 burgers left and an ice cream cake, both of which I took with me and handed out to different homeless people on the street. It’s nice to know that our excessive amount of gluttony benefited some people tonight.

All in all a thoroughly enjoyable evening… and even a fulfilling one with the knowledge that there are some people tonight that are no longer hungry thanks to the remnants of a football party.

Before I end this note, I have to say… I freaking hate the Steelers. And I more-so hate the officials that seemed incredibly biased towards the Cardinals. So many bad calls. I still love you Fitzgerald.