Wowzers… been a while right?

What can I say? Just around the time of my last post, I booked a project which rolled into another project… and then another and another and before I knew it I was 5 months in & 13 jobs deep. It was a roller-coaster of a summer to say the least. After months of work, sleepless nights and a few tears I came away with new friends, a great sense of accomplishment and a store of new experience. I actually feel a tinge of confidence in my work now. I don’t come in to a new office with an unsettling fear that I will fail and disappoint the people who hired me (along with those who recommended me). It’s kind of great.

So now where am I?

Professionally, I’m working on a new project with a new PM and new Producer and entirely new crew. It’s a bit strange to come on to a set and not immediately recognize 50+ faces but… that’s the name of the game in commercial production (I was just spoiled by my golden summer).

Personally, I’m spending most of my free time playing video games on a couch I’ve grown extremely comfortable laying on, reading cooking blogs (smittenkitchen.com, amateurgourmet.com & thekitchn.com are my current favorites), and missing my family. All of the siblings are now spread out across the country with the singer and I still in LA, the actor in Davis, the photographer in Chicago and the baller (and littlest of all of us) studying her brain out in Tennessee. What’s worse than us all being spread out? It will be the first Christmas that we can’t all be together. In the past, there were times when some of us were in the Philippines for the holidays but this is truly the first time we don’t really have a choice in the matter. I love this time of year but this really will be a bittersweet Christmas. 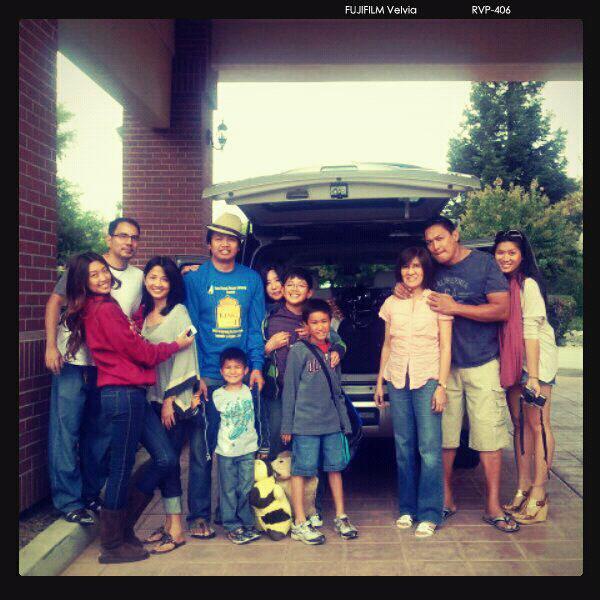 Ok, enough sap for one evening.

The real reason I thought about posting is because of a picture of huevos rancheros I posted on facebook this past weekend. Backstory: On Sunday, I was whipping up the boyfriend’s favorites for breakfast (french toast, corned beef & hash + fried eggs) when I was at a loss as to what to make for myself. We’ve really been into Chopped lately so he decided to throw a “secret ingredient” at me which I had to use in my meal (though I really think he was just trying to get rid of something he bought by mistake). It was a can of El Pato’s salsa de chile fresco which translates to “roasted fresh chile salsa”.

After I popped open the can & tasted its contents [pretty much tastes like tomato sauce with a very large kick], all I wanted was to bring back memories of my mini-trip to Mexico and have huevos rancheros for breakfast. Not to toot my own horn, but they turned out pretty good. And apparently other people thought so too! Ever since I posted this picture, I keep getting messages about the recipe. So here goes…

Typically huevos rancheros is made with fried corn tortillas, fried eggs & tomato-chili sauce. Mine? I made it with whatever I currently had in the kitchen. This is a super simple recipe that involves cooking 4-separate parts which is then combined together on a plate.

Pre-heat the oven to 500ºF. Or if you’re not fussy like me, just set it to a high-broil. You’re just toasting tortilla’s after all.

Sauce:
I started by melting about a teaspoon of butter in a 3qt sauce pan. Once the butter had fully coated the bottom, I added the chopped onions and sautéed until tender then added the can of salsa de chile fresco. Bring sauce to a simmer and leave uncovered to reduce the sauce and thicken it. Alt: If you don’t care for onions, pour that bad boy into a microwave safe bowl and heat till warm.

Tortillas:
Cut up the tortilla into triangular bite-sized pieces. Toss them on to a baking sheet and pop ’em in your pre-heated oven for about 10 to 15 minutes until they crisp and brown. Alt: For extra crispy tortillas, sprinkle them with a bit of olive oil & salt to taste then mix with hands before toasting in oven.

Beans:
In a small skillet, coat the bottom with a bit of vegetable oil (I use stainless steel this is necessary but for you teflon folks, a teeny bit of PAM spray should do it) then add your can of refried beans (I prefer the black variety). Once it begins to soften, add a small handful of the shredded cheese. Continue heating until cheese melts, stir in & set aside.

Eggs:
This already a super heavy meal… so I used a non-stick pan with the teeniest bit of oil (I poured some on a paper towel and spread it on the fry pan), cracked two eggs in, added some salt & covered on medium-low heat until the whites were fully set. Alt: Poach em’, fry em’, boil em’—do it your favorite way… whatever’s clever loveys!

Plate:
Start with the tortillas — put them on the plate so that they sort of cover the bottom. Cover with the heated refried beans and then lay on those eggs. Pour the sauce over everything then sprinkle on a handful of shredded cheese. 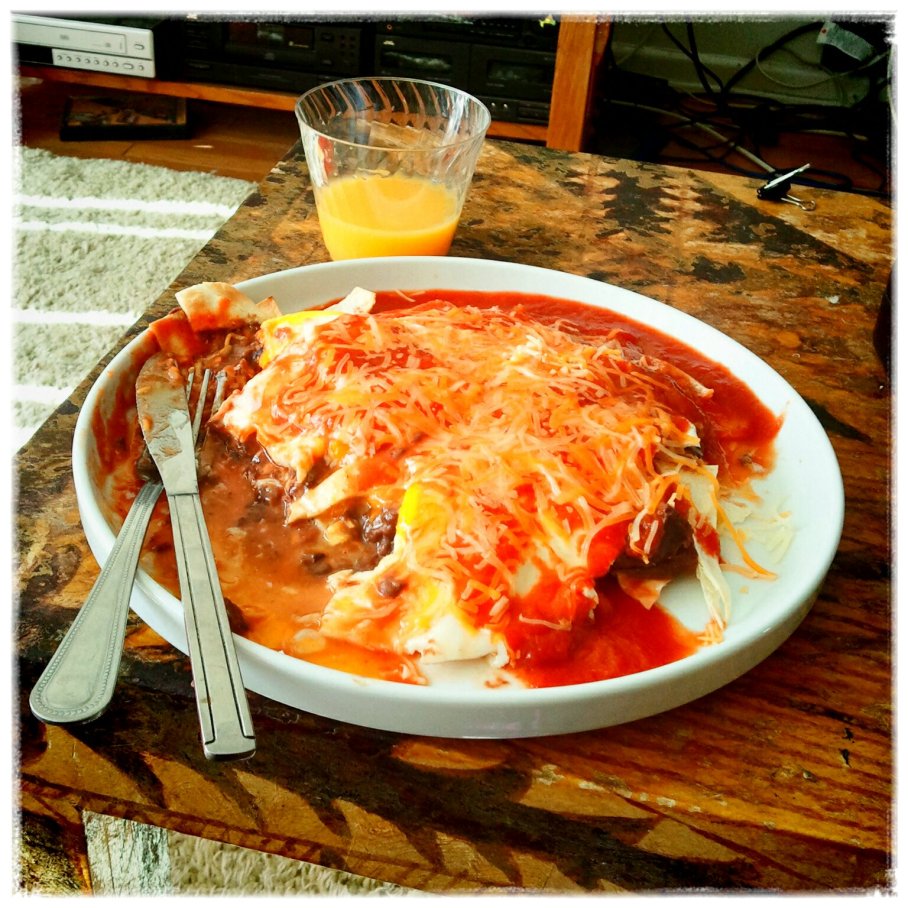